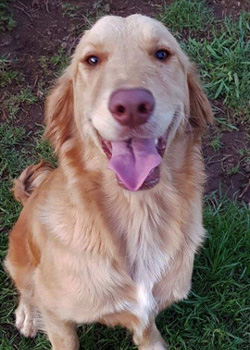 Kiah means second opportunity or renewal in several languages and Kiah was given this name as the first part of her life was simply one of survival and this girl deserves a second chance. Kiah was removed by the RSPCA from a situation where unrestricted over breeding between many different breeds of dogs was taking place and hoarding had occurred. When GRR picked up Kiah she was carried to the car as she was too fearful to move and had never worn a collar and had never had interaction from other humans.
Three months later and Kiah is now walking on lead, loves to interact with humans so much so that she is in the process of being taught people greeting manners. This girl would knock you over in her exuberance to love you. Living in a large pack situation Kiah has learnt to look after herself and will require a home where she is the only dog or the dog in the home has been well socialised and is calm and laid back but enjoys playing. Food is a big issue for Kiah and she has shown that she is very protective of her bowl, bones and biscuits.
The RSPCA has optimistically completed her paperwork as a Goldie X. She certainly loves like a Goldie, retrieves like a Goldie, loves the water and has a lovely Golden coat but she also has a white blaze on her chest and lacks pigmentation on her lips and around her eyes. There have been many guesses as to her breeding but at GRR we have made the decision to call her a Multi Pedigree. When visiting the RSPCA, GRR realised that given Kiah’s terrified state this girl was not a viable option for sales and her future was bleak. GRR’s foster carer could not leave Kiah at the RSPCA knowing her fate and believes that not having the label ‘pure Golden Retriever’ is not a reason Kiah should miss out on having a loving home and family. 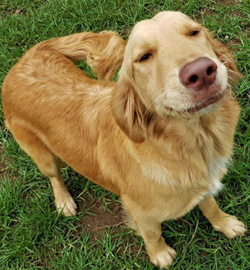 So, here she is...not quite a Goldie, but a lot like a Goldie, with a big heart full of love, a big smile, lots of energy and looking for someone up for the challenge of turning her into the dog she was always meant to be.
Kiah requires a home where:
she is the only dog or there is another dog in the family that is well socialised and enjoys the company of another dog with some playing and wrestling,
there is secure fencing at least 1.6m high. No rural fencing as Kiah is a climber,
someone is around much of the time,
no cats, small dogs, rabbits or pocket pets,
her new family is prepared for the challenge of teaching Kiah what it’s like to be part of a loving home,
there is secure fencing which is not barbed wire or strand wire and decks are fenced or one or two step in height,
if there are children in the family they need to be over 12 years.
If you have the time and commitment and would like to be part of turning a dog’s life around and receive all the rewards of a loving family member, then please complete and return the Adoption Questionnaire.
To assist GRR in finding the perfect fit for Kiah, only applicants who meet the criteria listed on this poster will be considered for adoption. Applicants who do not meet the criteria will not receive a reply.
Kiah comes microchipped, desexed, vaccinated, heartworm tested and treated for heart worm, intestinal worms and fleas.
Thank you. We look forward to hearing from you.