Golden Retrievers who are currently looking for a new family to call their own are listed below. Please click on each photo to find out more about them. If you are interested in one of the dogs please ensure you complete and return the Adoption Questionnaire to Golden Retriever Rescue Inc before contacting us. It should be noted that GRR only rehomes dogs in NSW, the ACT and VIC.

** Please note that this page contains only a small number of the rescue Goldies currently in care and looking for new homes. Some of our rescues require only a minimal amount of time with a foster carer before they are assessed and ready to go to an approved family, whereas other dogs may require extensive veterinary treatment or behavioural rehabilitation depending on the circumstances from which they have come. For these reasons GRR does NOT post every rescue Goldie on this page, in fact, the VAST majority of our Goldies are rehomed to applicants already on the approved list who have been waiting for the right Goldie to come along. ** 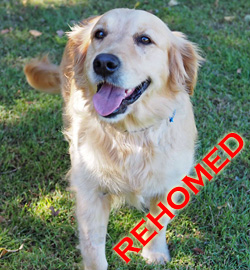 Rescues 1 (Sally and Belle)
Four year old Sally and three year old Belle arrived into GRR’s care after being surrendered by a puppy farmer to the RSPCA. When GRR picked up Sally and Belle from the RSPCA they were very frightened and had to be carried to the car. On arrival at GRR it was obvious that Sally had not long given birth to a litter of puppies. These sweet girls were very wary of people but once they learned that life at GRR meant good food, a warm bed, lots of cuddles and plenty of time to run and play in the paddocks Sally and Belle’s cheeky personalities began to shine through.
Sally and Belle were previously posted individually but after watching their confidence levels grow GRR has decided that the best outcome for these girls is to be rehomed together...... 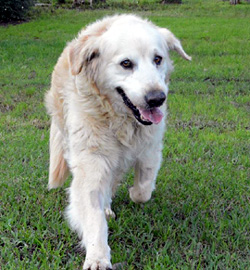 Rescue 2 (Jack)
Jack was twelve and a half when he was surrendered to the RSPCA. Jack’s owner had passed away and there was no one to take on this dear old boy. The RSPCA put Jack through his veterinary check and found him in very good condition for his age so GRR was contacted in the hope that this funny old guy would be found a forever home. Since his arrival Jack has been receiving supplements for arthritis and he is moving better, although there is the occasional oops when cornering too fast and Jack loses his footing. This boy enjoys runs in the paddock, meeting other dogs and sniffing where the bunnies and foxes have been. Being a typical Goldie, Jack likes to carry his stuffy around and shove it into your hand so he can play tug. Not a great deal is known about Jack’s previous life but his foster carer states that Jack loves to be right next to you all day, every day...... 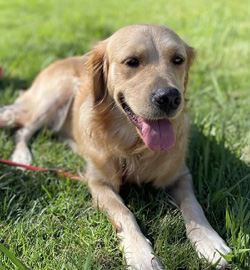 Rescue 3 (Lucy)
Meet fifteen month old Lucy who has come into GRR’s care as she requires a family that has the time and commitment to continue her training and show this sweet young girl what it is like to be part of a loving home and family. This young girl is a typical Golden youngster. She enjoys playing with other dogs, doing zoomies in the yard, chewing everything in sight, barking for attention, pulling on lead, not coming back when called and also learning to enjoy cuddles and understand that the people she meets mean her no harm.
Lucy’s foster carers are working with her and her behaviour is improving but this young girl is a work in progress and her training will need to be ongoing in her new home. Lucy travels well in the car, does have an issue with barking for attention and is currently enjoying chasing her foster carer’s cats as Lucy wants to play with them..... 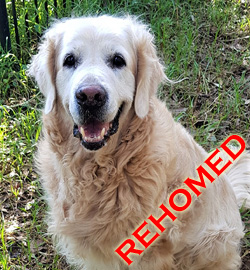 Rescue 4 (Harry)
Ten and a half year old Harry has come into GRR’s care when his family’s circumstances changed which meant a move overseas where Harry could not accompany his owner. This gorgeous boy has been very much loved and thoroughly spoilt. Harry will let you know when it is time for dinner and when to let him inside as this boy knows the luxury of being a full time inside boy and Harry wants that lifestyle to continue.
Harry is currently on a course of injections to ease the arthritis in his rear leg as well as daily supplements to give his joints ease of movement and these are working well with Harry running across the paddock. His previous owner advised that Harry may suffer from an upset tummy from time to time so GRR has started Harry on supplements to ease this issue and Harry is now eating a whole range of food along with his dry food and is doing well.......